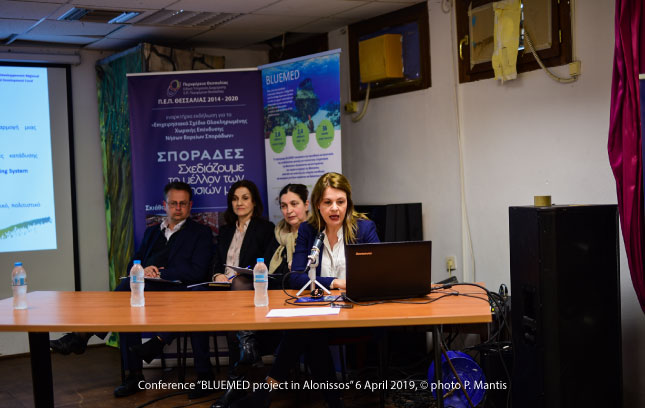 During the weekend 6 & 7 April 2019 the two days Conference “BLUEMED project in Alonissos” successfully took place in Alonissos. It was co organized by the Region of Thessaly and the Ephorate of Underwater Antiquities (EUA) and supported by the Municipality of Alonissos.

On Saturday 6 of April a Conference open to the public was realized during which the shipwreck of Peristera was presented by Dr. Eplida Hatzidaki, excavator of the shipwreck and former Director of the EUA. Dr. Dimitris Kourkoumelis, in charge of the Ephorate’s office in Thessalonica, talked about the sea routes and the ancient shipwrecks in Central Aegean Sea while Dr. Sryridon Iosifidis, Dimitris Poursnanidis and Vasiliki Vasilopoulou underlined the importance of the preservation of the natural heritage at the National Marine Park of North Sporades and Alonissos. Mrs. Angeliki Veneti, Region of Thessaly and coordinator of the project, referred to the importance of the BLUEMED project and its perspectives. Dr. Pari Kalamara, Director of the EUA, analyzed the design and planning of the Accessible Underwater Archaeological Sites while Mrs. Polytimi Gravvani, Head of Unit A` of the Special Management Service of the Regional Operational Programme of Thessaly, presented the contribution of the Regional Operational Programme of Thessaly to the promotion of the Accessible Underwater Archaeological Sites. Finally, Mr. Angelos Manglis, Atlantis Consulting, argued about the BLUEMED project and the development perspectives of Northern Sporades. The Conference was welcomed by the Deputy Minister of Culture and Sports, Mr. Konstantinos Stratis, the Regional Manager of Thessaly, Mr. Konstantinos Agorastos (who although did not attend the Conference expressed his support for the project and praised its positive results) , and the Mayor of Alonnisos, Mr. Petros Vaphinis.

On Sunday 7 of April divers had the possibility to dive to Peristera’s shipwreck. The divers were escorted by archaeologists of the EUA and divemasters of the diving centres of Alonissos and Skopelos. Before the dive, a briefing was organized providing information about the history of the specific shipwreck of Peristera, of ancient shipwrecks in general and their wider historical and archaeological importance, as well as on the safety of the divers and the technical organization of the underwater visit.

On the same day a training course was carried out at the City hall of Alonissos from 16:00 to 20:45. The training course was organized by the Ephorate of Underwater Antiquities and the University of Patras – Department of Civil Engineering. This course was addressed to professional divers, involved to the diving tourism industry. Dr Pari Kalamara, Dr. Dimitris Kourkoumelis and Mrs.Despoina Koutsoumpa (EUA) were the trainers. At the beginning of the course Mrs. Koutsoumpa presented the in force legal framework in Greece for the protection of the underwater cultural heritage and then displayed the general operational framework for the accessibility of the underwater cultural heritage. Right after, Dr. Kourkoumelis presented the suggested diving routes of the Peristera’s shipwreck and talked about the advantages and disadvantages of the suggested diving routes and the experience that was gained during these days, since EUA had the possibility to test these routes with professional and non professional divers on the 5th and the 7th of April.

Before the begging of the course, a material was handed out to the participants. This material was prepared by the Ephorate of Underwater Antiquities and the University of Patras – Department of Civil Engineering and included:

a) A text for the training course.

b) The Ministerial Decision of 2003: Concerning the characterization of shipwrecks as cultural goods. Declaration of wrecks of ships and airplanes 50 years after the day of their wreck as monuments.

c) The Opinion the State Legal Council 311/2016, according to which shipwrecks are immovable monuments; however, wherever is needed, the provisions on movable monuments are applied.

d)The Official Government Gazette, Volume 2, Number 119, 21st of January 2015 on the legislation for the Foundation of Underwater Accessible Archaeological Sites at the sea areas of Alonissos Island and West Pagasetic.

A vibrant discussion followed with the participants which led to the extension of the seminar for 2 extra hours and 45 minutes. 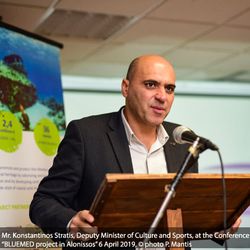 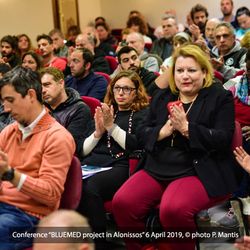